Back when I completed my undergraduate program at 21 years old, I entered the real world with 90k of student loan debt. Apparently, that didn’t intimidate me too much as I bought a new car and went back to school for my graduate degree. In total, I racked up over 150k of debt and knew I needed to not only get financially educated, but to put together a rock-solid plan to get back on track. This not only led me to minimalism where I’ve reduced my spending to only things that make me healthier or happier, but also to the world of financial literacy, independence, and investing. This plan has allowed me to not only become completely debt-free, but also to accumulate 300k in investments. And although I’ve detailed the 7-step plan I used to get here, today I’m going to detail exactly how that plan has played out including all my investments. All of this to show what’s possible with a plan… consistency… discipline… not paying for Starbucks coffee… only wearing a single pair of jeans… and not impressing my female dates with my 10-year-old Nikes… But hey, these were the second most memorable Nike Olympic sneakers of all time! [1] Cut me some slack. Anyways, let’s get into it!

First, I’ve always felt it’s important to have a 3–6-month emergency fund. Now, I’d say being 150k in debt was already an emergency, but I didn’t want it to get any worse by having to take out more detrimental debt from an unseen circumstance. So, I saved up around $5,000 at the time and never touched this unless it was a true emergency. Since I’ve gotten out of debt, I’ve increased my emergency fund to $10,000 that I just let sit in a savings account. Although, with 5% inflation and savings accounts producing basically zero interest, this fund is losing value every year. But hey, it’s a small portion of my savings and I’m not too worried about it at the moment as savings accounts are still one of the safest investment accounts today.

Second, I had to take advantage of my employer’s 401k match. Technically, I’ve worked in the public and non-profit sectors my whole life, so I’ve had a 403b or 457 plan but it’s essentially the same thing. This is a retirement account that your employer may offer and if you’re lucky, match a portion of your contributions. If available, it’s free money. For example, if your organization matches 3% of your salary in contributions, then I’d invest 3% of my salary knowing that the company would match that investment for me. It’s like a 100% rate of return that I wasn’t going to pass on. So, after my emergency fund was completed, I invested my remaining paycheck in my retirement plan to get the employer match and I still do this today. Give me two minutes and I’ll detail how much I contribute and where exactly that money gets invested.

Step 3: Pay Off All Debt (Except the House)

Third, after I had my emergency fund and employer match, I would dump all the extra money I had into paying off all my debt. This step was obviously the most demoralizing. Work hard for two weeks and that paycheck was sent straight to my lender. It was as if my life were owned by someone else and I wouldn’t see the profits of my labor for years. It sucked. It really did. But it lit a fire under me to never get into this position again. Now I have a few separate posts on how I’ve paid off this debt, but essentially, I reduced my expenses to as little as possible and focused on increasing my income each year. I then paid off the loan with the highest interest rate first, the avalanche method, as that’s mathematically the fastest way possible to become debt-free. But, if you aren’t as laser focused as I was, you might find the snowball method best by paying off the smallest loan amount first. There isn’t a lot of difference between the two so just pick what works best for you and get to executing. But anyways, yea I did pay off all 150k of debt and am still debt-free today.

Step 4: Max Out Your Roth IRA

Fourth, I started maxing out my Roth IRA. This is an individual retirement account where you contribute after tax dollars. Although you pay taxes upfront when contributing, your investment gets to grow tax-free and the withdrawals in retirement are tax-free. Another benefit of the Roth IRA is you can withdraw your initial contributions anytime if you ever need them without penalty. Although I don’t recommend or do this, it’s nice to have that flexibility if needed. Honestly, I’m kind of smitten on the Roth IRA… it’s just a lovely account. I’ve been maxing out this account for a few years now and it’s reached a 115k valuation. All the money in my IRA is invested into an ETF with a ticker symbol of VTI. It’s a Vanguard Index Fund that’s a mix of all stocks publicly traded in the United States. It’s just a low-cost effortless way to invest in stocks that requires little maintenance because it’s already diversified. So, as soon as I contribute cash to the Roth IRA account, I invest that cash in VTI immediately and never think about it again. Hopefully, I don’t forget it when I’m 60…

Step 5: Max Out Your HSA

Fifth, after maxing out my Roth IRA, I max out my HSA. This is a health savings account that covers medical expenses now and in the future. If you have a high-deductible health insurance plan, then you’ll usually have an HSA available to you. If you have another type of health insurance plan, then you may have an FSA available to you which is nice but not as great as an HSA. With your HSA you can accumulate money year over year to create a nice cushion for future medical expenses. It also saves you a lot on taxes as contributions, growth, and withdrawals are tax-free. This is called the triple tax takeaway. No, it’s not, I just made that phrase up. On top of saving on taxes and not having to worry about future medical expenses, your HSA will also act as a retirement account once you turn 65. So, even if you don’t need that money for medical expenses, you’ll still have it for your trips to Disney… for the grandkids obviously. I just started maxing out my HSA a few years ago so right now my account is valued at 9k. $1,500 of that is in cash to cover my yearly deductibles while the remaining $7,500 is invested in an ETF with a ticker symbol of VNQ. It’s a Vanguard Index Fund that’s a mix of real estate investment trusts. It’s my way of having a little more exposure to the real estate market. Again, as soon as money hits my HSA account, it gets immediately invested in VNQ and forgotten about.

Sixth, after my Roth IRA and HSA are maxed out each year, I return to the 401k. The more you contribute to your 401k, the more you’ll save on taxes upfront allowing you to accumulate more money over time. While I didn’t start maxing out my 401k until a couple of years ago, I contributed whatever money I had left and increased my contributions as my income grew. Now, that means I’m contributing $19,500 each year into the account plus my employer’s match. Right now, the account is sitting at 89k. I have a separate post detailing how I picked my 401k investments but it’s not much different than my Roth IRA strategy. 90% of my account is invested in a low-cost index fund that mirrors the United States stock market while the remaining 10% is invested in a low-cost index fund that mirrors the United States bond market. Those respective ticker symbols are SVSPX and VBTLX in case you wanted to look them up, but it mostly depends on what funds your plan offers. Again, nothing fancy here. Just automated investments into low-cost, diversified funds that I rarely think about. Set it and forget it investments.

Finally, after all my tax advantaged accounts have been maxed, the remaining money can be invested wherever I like. This is the fun part! Whether I want to save up for a down payment on a house, invest more into stocks using a brokerage account, dip my toes into the world of cryptocurrencies, or buy a Cryptopunk NFT for $500,000. Ok I haven’t done that last one, but I’ve thought about it… and realized my entire net worth still isn’t enough to afford a 24×24 pixel digital image… Anyways, I have 80k invested in a brokerage account with Robinhood. 70k of that is invested in a low-cost Vanguard index fund that’s a mix of the 500 largest companies in the United States. Specifically, ticker symbol VOO and this isn’t much different than the other Vanguard index fund I mentioned previously (VTI). They’re more similar than different. Besides that, I have $6,000 invested in Bitcoin and $4,000 invested in Ethereum. I did a post on this months ago but my take on crypto is that it’s a speculative bet that shouldn’t exceed more than 3-5% of my portfolio. Still, nobody knows where cypto is going in the short or long term, so I have some money invested that I don’t plan to sell for a while.

My hope is that by detailing the exact steps I’ve taken to get out of debt, and how and where my money gets invested, will bring more transparency to the personal finance space. Maybe it’ll make investing more comfortable for you, or spark your interest to learn more, or maybe it’s just fun to see where someone else’s money goes. Mostly into stocks and not my shoes… I still love you 2012 Olympic Nike Flyknits… Anyways, hope this was helpful as excelling in personal finance can help you live healthier and happier.

Disclaimer: I’m just a dude writing blog posts from his bedroom on a Friday night. And then talking to a camera by himself in his bedroom on a Saturday morning. This isn’t investment advice so make sure to do your own research. 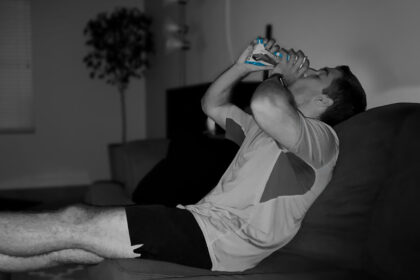 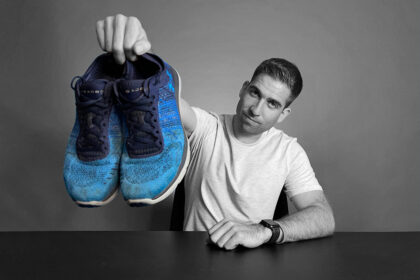 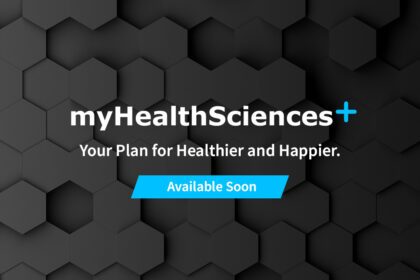 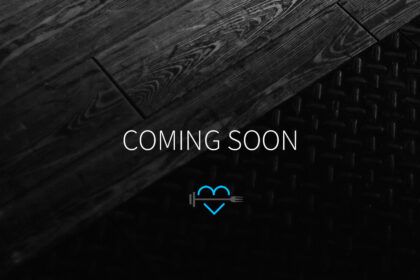 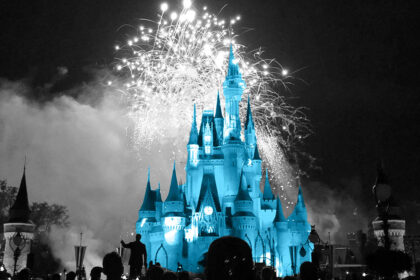 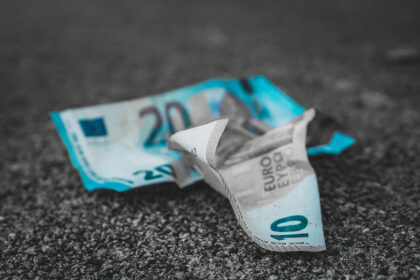 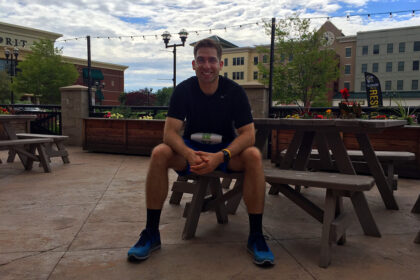